Free Shipping and free returns for all orders over $50

Huston first garnered attention when he signed a sponsorship deal with Element Skateboards and joined their team. During his debut era with the company, Huston appeared in numerous Element video productions, such as both volumes of the Elementality series, and competed in high-profile contests, such as the Dew tour and the Vans Downtown Showdown. However, Huston eventually launched his own skateboard deck company, I&I, in 2009 after he parted ways with Element in 2008; Huston was an amateur skateboarder at the time of his departure.

I&I was a short-lived company and operated for approximately two years with a team that consisted of Huston, Richard Jefferson, and Anthony Williams. During the period of the company's existence, a number of magazine advertisements were published and an online promotional video that featured the three team members was released. The primary aesthetic influence of the brand was Rastafari and the I&I logo incorporated the pan-African colors of red, yellow, and green.

Following the closure of I&I, Huston returned to Element and released a solo video production entitled Rise & Shine in 2011—the video was available for purchase on the iTunes website and later received the "Best Video Part" award from the Transworld Skateboarding magazine. During this stage of Huston's career, the skateboarder also joined the DC Shoes company as a team rider, following a significant period of time without a shoe sponsor—an unusual occurrence for a professional skateboarder with the degree of exposure that Huston had attracted. In response to the DC Shoes announcement, Huston explained that "I think it was all a buildup of things over the past year. DC has always been my top choice for a shoe sponsor but I think it took this past year for them to see what I've accomplished and how I did in the contests and my video part and all that for it to finally come through."

Following Huston's decision to skateboard for DC Shoes, other DC team riders expressed their perspectives in online promotional material produced by the shoe company. Long-term DC team rider Josh Kalis stated in the introductory video for Huston (also featuring Mike Mo Capaldi), "And then there's this other dude out there, literally buying shoes from a skate shop. He could get shoes from anybody that he wanted, but he was buying DCs." Capaldi expressed his opinion on Huston in the same video, stating his belief that Huston is "probably the best skateboarder I've ever seen—he does everything in, like, two tries."

After Huston's gold medal victory at the 2013 X Games Street League contest in Barcelona, Spain in mid-May, Transworld SKATEboarding magazine announced that no other skateboarder has won a greater amount of prize money.[5] On the final night of May 2013, the DC Shoes Co. held a launch event for the first signature model skate shoe of Huston's career at the Roosevelt Hotel in Los Angeles, California, U.S., with Pete Rock in the role of DJ. The model is named the "Nyjah Huston Signature Shoe" and the promotional advertisement features Huston executing a trick at set of stairs at Hollywood High School in Los Angeles, U.S.

An announcement on June 25, 2013, revealed that, due to a rib injury, Huston was unable to compete in the Street League contest at the Munich X Games in late June 2013. Huston's mother Kelle Huston reported that her son "bruised and scraped the right side of his torso" in a skateboarding accident, but an article from the Street League website stated that Huston would be fit to compete in the next contest round in July 2013 in Portland, Oregon. Also in 2013, Huston made a statement to Thrasher Magazine in which he questioned the appropriateness of female skateboarders. He later apologized for his remarks.

Nyjah qualified for the United States Olympic Team in the Street Skateboarding discipline for the 2020 Tokyo Olympics - the first year for skateboarding at the Olympics. He qualified for the Olympic final out of his heat (heat 3), but did not medal in the final. He posted excellent scores in both of his runs,[neutrality is disputed] and landed his first of five best trick attempts, but he fell four times in a row after that to finish seventh, missing out on a medal. 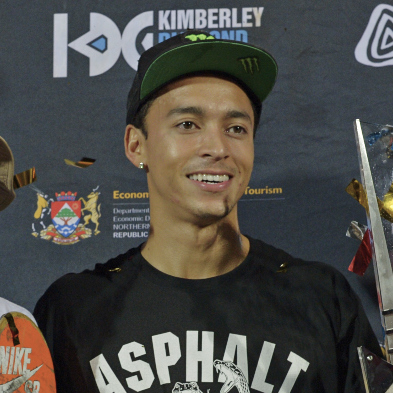